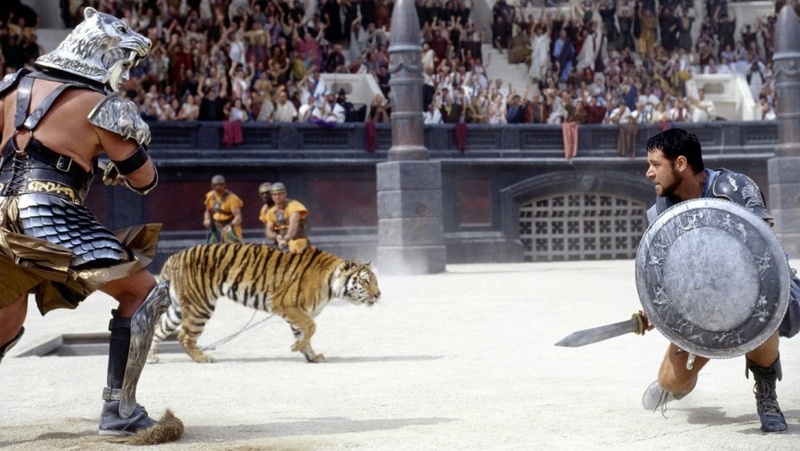 You are asked to write a short essay about gladiators. Who were they? What was their profession?
Provide couple of reasons and justify WHY they were wonderful fighters.

Gladiators- They fought in Colosseum Rome, Italy. they didn't fight with other Gladiators, but sometimes they fought with lion or tiger. At first they started from Etruscan. People took Etruscan to Fencing show and all of them fun when Etruscan show. But later Etruscan Be dismissed by Roman, and then Roman took this thing and called Etruscan fighter "Gladiators" or "Swordsman". Roman called gladiators Two forms 1.Andabata:the fought that Arrested in a closed cap.
2.Arbres:The fought who put armor on one ax and the other on the other.
3.Tiberius:fought with the beast will put on small armor, and the weapons that they used will be nets. Or double spear.
4.Buztworius(I didn't sure about this

)be used light weapons.
5.Austus(I didn't sure this too

)They used their bare hands, but they wore steel on their hands to fight them.
6.krupalali(I didn't sure, again

)Hold the shield with the sword.
7.Di macherud:Used double sword weapon.
8.Essassarius:Fought on horse carts.
9.Hoblokus:The warriors who wore
the helmet have a peak hat similar to that of the Greek and Roman soldiers. Hold a small or large shield, the weapon be a spear or short sword.
***And this is my information and all of this I didn't copy I use translator for Thai to English Thankyou
Gun Cheenglab M3/4 No. 1***

Paragraph 1: A gladiator is swordsman,from gladius, was an armed combatant who entertained audiences in the Roman Republic and Roman Empire in violent with other gladiators, wild animals, and condemned Some gladiators were volunteers who risked their lives and their legal and social standing by appearing in the arena. Most were despised as slaves, schooled under conditions
Paragraph 2 : I will discribe shortly long time ago in rome in colosseum arena gladiator the man who fight for entertained people (but they don't want to do this)because gladiator is slaves or prisoner who forced by master.I think gladiator is very torture because they must fight with other gladiators or wild animal such as lion and tiger.And gladiator can't escape.If they try to escape the guards will kill gladiator immediately or push the gladiator back to the arena and fight until gladiator die.this is the slave gladiator .But another gladiator is independence person who life insurance for entertain people in the arena.This gladiator register to fight in arena for entertain people.Ok finished
*I recommend you to read paragraph 2 because it more understand than Paragraph 1
Ok thank you very much
Thanakorn Chitsuksom M.3/4 NO.6

A gladiator is a swordsman.It's name comes from the latin word, gladius which means sword.Normally gladiators are slaves, prisonersor soldiers ,sometimes normal people voulanteered to join the fight to get rewards.They fight to entertain people and sometimes get rewards which their freedom.Gladiating was very famous in the Roman Republic and Roman empire.Gladiators need to fight all kinds of enemies.Sometimes they need to fight another gladiator or wild animals.They were celebrated in high and low fighting arts.When gladiators fight,they got chained on both of their legs so that they couldn't run away too far.Most gladiating games ended with one of the gladiator being killed.The games are not always fair.Sometimes a gladiator have a weapon but the
other one don't.There are 10 types of gladiators.

1.Bestiarii-This type of gladiators are normally the gladiators who fight wild animals.When animals like tigers,elephants and bears appears in the colosseum.Bestiarii would be sent to fight those animals and show their power and skills.Bestiarii also divide into 2 smaller groups.
1.1)damnetio ad bestias-In this group the gladiators would be the slaves or prisoners.If you want to live,you must win.The death of this group of people mean nothing to other Roman people.Their lives are only being used to entertain people.A lot of people got killed and eaten by wild animals.The animals torn apart by wild animals.But instead of the audience feeling bad for someone being killed by the animals,they enjoyed it.The second group which is venation is the opposite.
1.2)venation-These gladiators are usually hunters or people who are specially trained to fight with animals.One of the most talented gladiators is well known as Carpophorus.There is a story which says that he killed 20 wild animals with his bare hands!!! The story also said that he was the one who found these animals and trained them to be very ruthless.

2.Noxii-This group of people have the lowest value of life.They weren't even got counted as people!! These people are slaves,jewish people,rebels and murderers.They need to fight or kill each other in order to stay alive.They wouldn't have any weapons,shields or even any clothes during the fight.Sometimes they are blindfolded and need to fight using their instinct.

4.Secutor-They usually fought with Retiarius.They would wear a big and heavy armor, and have a gigantic strong sword and shield.They also wear a metal hat that covers their face but leave a little hole for the eyes so that they can see.When they are in a battle,they need to avoid Retarius's net.Both types of gladiators need to fight each other with their own techniques.The most famous gladiator in this group is called Flamma.He is Syrian.He needed to fight 34 times in a row!!!! The result is,He won 21, tied 9 times and loss 4 times.He got the opportunity to set himself free 4 times.Which is a lot.But he refuses every single time.He had been a gladiator by blood.

5.Equites-The word Equites can also mean horse soldiers in Roman.These gladiators are people who the king trusted.The percentage of these people death is very low.These people are specially chosed to entertain the audience.They are often used to battle to be the opening of the gladiating ceremony.They are fought while riding horses,they would wear thin armor and had a sword.Their armor is thin so that they can move more quickly and more easily.

6.Provocator-Normally,gladiating will be composed with many types of gladiators.But...for this type of gladiators,they will chose their own battle partner.They will choose the strongest gladiator in the arena and fight with all their techniques and skills.This is what makes this group of gladiators very unique and very interesting.

7.Gallus/Murmillo-This is the first(original) type of gladiator.Mostly,the gladiators are from Gaul tribe and Celt people which is from France.In the begining these gladiators were war captive.These gladiators would wear heavy metal armors,held long swords,wore hats and wear the tribe costume (this is the type of gladiator we saw in the movie).This fight would be fulled with power because the Celt people are very strong and they always practice their fighting skills.Finally,this tribe joined with the Roman Republic.So,they changed the stlye of this group to Murmillo.They still use long sword and heavy armors but they dress up more alike to Romanian soldiers.The most famous gladiator in the group is Marcus Attilius.He killed Hilarus and Lucius Felix, 2 of the most powerful gladiators.

8.Samnite-Samnite is a little bit the similar to Gallus.These people are war captive who came from Samnium region (Southern Italy).The rules is Samnite gladiators must fight each other to celebrate Rome seizing the Samnium region.The gladiator who lost will be mocked by a lot of people.
A while after Samnium region was a part of Rome.So,this type of gladiator slowly disappered and joined the Murmillo type instead.

9.Thracian-The most famous gladiator that everybody know is called Spartacus.He was war captive that came from the Thracian tribe.He betray his boss who was the person that trained him to be a gladiator.Then collects an army of slaves (about 70,000 people) to fight back for freedom with the Roman Republic.His story has been a legend until these days.These gladiators would wear a big hat and have a round shield.They often fight with Gullus ans Samnite because they are all war captive.But Tharcian is famous for how amazing they were.

10.Gladiatrix-A very special type of gladiator.These gladiators are girls!!! They normally come from a high type of people.They usually wear a small piece of armor to show their bodies.When they finished the battle the king sometimes throw the Gladiatrix's uniform to the audience as a gift.

*Note:I did not copy anyone's answer or any website.I just try to find the most information I could find.I hope it's enough.I tried really really hard for this.Last,if I make any mistakes about my information,I'm sorry.At first I clearly have no clue what gladiators are and what did they do in the past.I found it very fun finding the information and watching the movie.Thank you.

Gladiator is the swordsman, fight for entertainment for people.He can fight with the other gladiator or animals.More gladiator were slaves.They fight in the Colosseum Rome,Italy.They can died in the Colosseum because of the fight.At now colosseum are over 2,000 years.The gladiators hold shield and sword fight with the enemy.They can make sound from a people.There will the king and the queen watch from the above and many people will come to see the battle.
There are many types of gladiators such as
1. Andabata was a blindfold gladiators
2. Bestiarus was a bleast fighter
3. Cestus was a first-fighter or boxer
4. Gladiatrix was a female gladiators of any types so amazing!
5 Holomachus wore quilted, trouser-like leg wrappings, loincloth, a belt, a pair of long shin-guards or greaves, an arm guard (manica) on the sword-arm.
Thank you
Chayatorn chumchuen M.3/4 No.3

Time is up. We have got three winners.

1st place (1lvl up) - Alilada Lily Vagyoczki: for perfect and thorough description of the gladiators with the huge emphasis on details and division of particular classes.

Winners are obliged to show up at the teacher's room ASAP to redeem awards.